Although Ginger had no business being in the bottom WHATSOEVER, the team’s placement came as no surprise. It was… messy. In Untucked, all four bottoms launched their bids to stay in the competition, before Trinity called them out for not condragulating her. Later, Trinity – one of the best lip-syncers in Drag Race herstory, facts are facts – took to the stage and waited for her lip-sync opponent. After the veil lifted to ruveal… no one, Trinity’s season six sister Laganja Estranja jump-shablam-d (did we get that right?) onto the stage in an epic tribute to her original Drag Race entrance. C’mon Gay Twitter, get on [insert gif-making website here] and provide us with those memes.

In one of the most riveting lip-sync smackdowns in herstory, Trinity and Laganja performed the splits, kicks, flips and a plethora of other sickening tricks to the beat of Dua Lipa’s acclaimed dance-pop anthem Physical. If you felt the ground shake, it was the collective screaming of gays across the globe. Not a joke, just a fact. Although the performance was double shantay-worthy, RuPaul declared Laganja as the winner – basically inviting her back for All Stars 7 in the process. We want it, she wants it, RuPaul obviously wants it – where’s the disconnect here?! Following her win, Laganja flipped her lipstick and revealed Silky’s name. 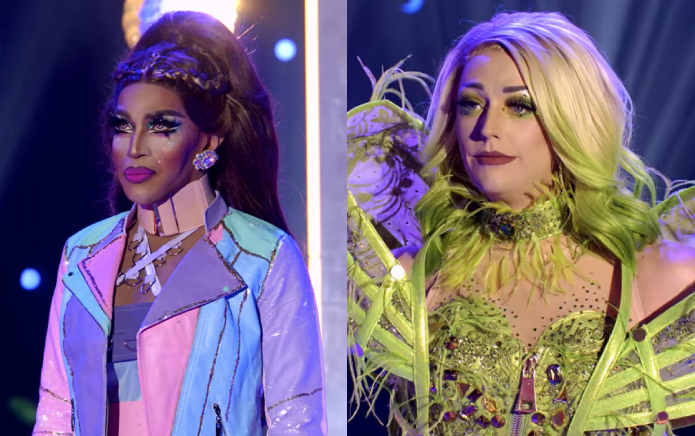 As she sashayed away from the competition, Silky delivered a powerful speech to her sisters and left us all sobbing in the process. “Damn girl! I just wanna say this. I pray this prayer every morning, to be the head, not the tail, the beginning, not the end, the peacemaker, not the drama, and all things shall be added unto you. So, thank you,” she said, before adding: “And I ain’t mad at y’all as long as you give me $10. Thank you, guys.” In line with past weeks, Mama Ru later informed Silky that her time on the season is far from over.

With genuinely laugh-out-loud (and heartfelt) moments in the maxi-challenge, some sickening runway presentations and a lip-sync showdown for the ages, this was, without a doubt, one of the best episodes in the herstory of RuPaul’s Drag Race. That headline wasn’t clickbait, honey, we meant it. After season 13 spanned 190 weeks and the first season of Drag Race Down Under caused controversy with racist scandals and more, it looks like Drag Race is back on top form, and we cannot wait to see what transpires next…

On next week’s episode, the contestants will be headlining the All Stars 6 Hall of Fame Halftime Show, and another queen will get… the chop. The first three episodes of RuPaul’s Drag Race All Stars 6 are now available to stream in the UK on WOW Presents Plus and Netflix.