San Leandro police went to the store after getting a complaint on call from a security guard of Local Walmart Store that Taylor was trying to escape without paying a penny to the Departmental store.

When Police reached, they found no sign of robbery. Instead, officers encountered Taylor, holding a baseball bat inside the store. CBS SAN FRANCISCO reported that Taylor tried.

CCTV Footage of Departmental store shows that Police was asking Taylor to drop the baseball bat. Officers use Tasers(gun) on Taylor twice, but he continued to move towards the officers. 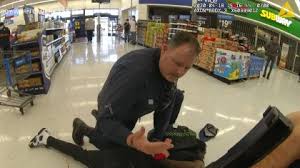 ANGER GUSHED UP IN MINDS OF FAMILY MEMBER:

Taylor’s Grandmother said that person who killed his Grandson must be given punishment. Taylor’s family said that he was suffering from a mental health crisis, and the role of Police is to safeguard his life rather than posing a threat.

The family of San Leandro demanding Justice and now, the District Attorney charged Fletcher with manslaughter I .e.unlawfully killing of any person. Fletcher asked to appear in the court on 15th September.

” People said that Taylor did not pose a threat of death or bodily injury to Officer Fletcher or to anyone else in the store. People said that the job of Police is to safeguard the life of the community rather than posing a threat, but Attorney of Fletcher Michael Rains said that Fletcher only feared for his life and defended himself.

Also Read: JoJo Removes Tony Lanez After Megan Thee Stallion Accuses Him Of Shooting On Him!