The American animated TV series DuckTales released on the Disney channel on August 12, 2017. Produced by Walt Disney Animation Studios, this new series is a reboot of the 1987 classic  DuckTales.

Based on Uncle Scrooge by Carl Banks, the show revolves around the adventures of Scrooge McDuck and Donald Duck. The reboot is a smash hit. Critics all over have taken positively to the show with IMDb rating them at 8.2/10  while Rotten Tomatoes has given them an approval rating of 100%.

The show has successfully aired for two consecutive seasons with the third season currently airing on the Disney Channel. The reboot is slowly becoming well known for paying homages to classic Hollywood films through one full episode every season. Season 1 Episode one titled “Jaw$” paid a tribute to Steven Spielberg’s shark thriller JAWS.

Similar to previous seasons, season 3 has also paid a tribute to various classics through their episodes. But the reference to Bruce Willis’ 1998 action-thriller DIE HARD has received the most praise all over.

Duck Tales Season 3 Episode 5 titled “Louie’s Eleven” is completely packed with film references. From Ocean’s Eleven to The Devil Wears Prada, the show as managed to spoof all of them in the best possible manner. But a sneaky reference to Die Hard has become the funniest joke by far.

This 5th episode introduces Daisy Duck, who is the love interest of Donald Duck, into the show. In this episode, Louise plan on breaking into a high-class party so that The Three Caballeros can play at the elite gala. Daisy Duck is the one who has organized the event to widen her career. There are scenes where Daisy is desperately making sure everything is perfect before her boss arrives. These scenes bore a great resemblance to Anne Hathway’s  2006 hit The Devil Wears Prada…

As the episode goes further, the party is invaded by Falcon Graves, who is considered as Scrooge Duck’s arch-nemesis. In the midst of all this, Donald and Daisy find themselves in the middle of a hostage situation. This is the moment where we all get to see Donald Duck trying to wake up the John McClane inside of him. Exactly how John McClane worked his way through the Nakatomi Tower, Donald and Daisy are also seen working their way out of the elevator. 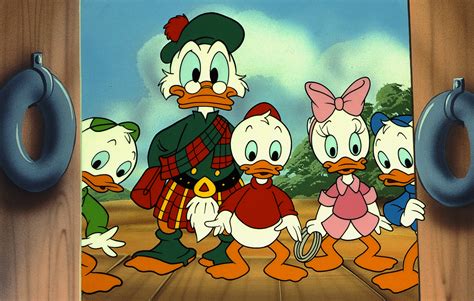 No Die Hard movie is complete without the catchphrase “Yippee-ki-yay” and neither is this episode. The final of the episode sees Donald and Daisy jumping down the vent and attacking Falcon Graves. Here we see Donald yelling the words: “Yippee-ki-yay, Mr. Falcon!”

This can gradually pave the way for a romance to bloom between Donald and Daisy. We’ll surely get to see to more as season 3 goes ahead.

For those who haven’t seen the show, you can view all the episodes of Ducktales on DisneyXD