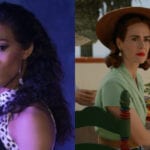 The Hollywood Critics Association TV Awards are right around the corner and LGBTQ+ television series have swept the nominations list.

The nominees were announced by Ghostbusters: Afterlife’s McKenna Grace and Home Before Dark’s Brooklyn Prince during a live stream event.

Samira Wiley was nominated for Best Supporting Actress in a Streaming Series, Drama for her role in The Handmaids Tale.

Sarah Paulson and Emma Corrin secured nominations for Best Actress in a Streaming Service, Drama for Racheted and The Crown respectively.

Glee fan favourite Alex Newell has been nominated for Best Supporting Actor for his role in Zoey’s Extraordinary Playlist.

NBC racked in the most nominations for traditional broadcasting networks with a total of 30 noms.

Netflix took the crown for having the most nominations for streaming services with 28 noms across multiple categories.

The inaugural show is set to take place on on 22 August 2021 at the Avalon Hollywood in Los Angeles, CA.