The Globe’s Romeo and Juliet is a bold, bleak re-staging

After an extended period of closure due to the pandemic, The Globe Theatre has reopened its doors for the summer season with a bold re-staging of Romeo and Juliet. We imagine most readers are familiar with the story, but any preconceptions are best thrown out of the window – this production shifts the focus away from the traditional romantic focal point. Instead, Romeo and Juliet has been reimagined with a focus on the societal issues plaguing fair Verona – it’s a bold and bleak staging with characters dabbling with drugs and brandishing knives and guns, while there is a focus on mental health, specifically young people with depression.

We’ll start with the good stuff – although their romance may not carry the gravitas it does in other productions of this show, both Romeo (Alfred Enoch) and Juliet (Rebekah Murrell) are superb in their respective roles, bringing energy and humour to the stage. We also really enjoyed Sirine Saba as the delightfully camp and fabulous Nurse. The band, too, bring key scenes to life – the masquerade ball benefits from upbeat pastiches of Arctic Monkeys and Basement Jaxx and there’s a humorously tragic performance of Lionel Richie’s Hello, with Paris serenading Juliet in an attempt to woo her.

Not everything is a success, however. Some of the devices used to feel a bit clunky and gimmicky. On stage for the whole evening is an electronic billboard displaying a series of facts, which are then read out to the audience by actors breaking character at the beginning of each scene. The facts are broad statements about the patriarchy, or the numbers of people with depression, or about suicide, or the emotional development of the brain. In some circumstances they do helpfully re-contextualise scenes, lending them a more modern meaning – but there’s no subtlety in their deployment and they often feel jarring. 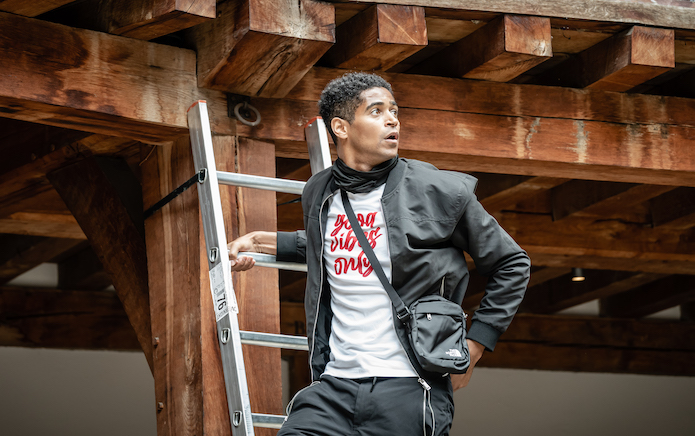 It also feels like there’s a bit of a pacing issue, particularly at the start – this is a relatively short production of the show without an interval. As a result, we were expecting everything to be pretty punchy but the opening scenes feel surprisingly slow. The pace does pick up significantly and we began to enjoy ourselves but it took us a fair while to warm to it.

The Globe’s production of Romeo and Juliet does provide some interesting food for thought. Reimagining this classic romance as a consideration of society’s pressures on young people is a clever idea and some of the scenes, particularly towards the end, work very effectively. However, while the concept is strong, the execution is sometimes lacking. On balance it’s still an entertaining watch, but there’s potential here for something even better.

More information can be found here.